Sometimes getting there is the adventure 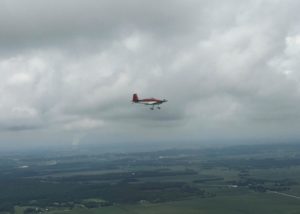 The day was to start early. Get the airplane out and fly to AeroCountry to meet up with fellow RV-8 driver Ken Krebaum. From there we would launch our 2016 trip to OSH. I spent weeks prior getting the airplane tuned up for the trip. Tweaking, testing, washing for the annual excursion. But you can’t always predict failures. Strapped in and ready for fun, I found that the master switch battery contractor was not so eager. So my day wasn’t going to begin until I changed it. Having several projects has the benefit of having spares. I put one of them on. I called Ken informing him my problem and we decided to meet at our first stop in Missouri instead of McKinney.

Tailwinds and blue skies all the way to northern Missouri was the flavor of the first leg. But things changed as we looked toward Iowa and Wisconsin. Massive storm systems live there. But we soldiered as far as we could get and Ken’s plan to skirt around the edge worked well. It did involve an hour or more of flying below a 2200’ ceiling on a hot and humid day. But, we were flying in the shade. Safely at our destination south of Oshkosh, we rest up for a busy week.

Join the Chapter or Renew

Join the Chapter by attending a monthly chapter meeting where you can fill out a membership application and pay the annual dues. ($20/yr). Read about how to join or renew here.

Now you can let people know about our Chapter.
Visit our online store here

Unless otherwise noted, our monthly meeting is held the first Tuesday of each month at 7:00pm. We meet at American Flyers at Addison Airport, 4650 Airport Parkway, Addison, TX 75001